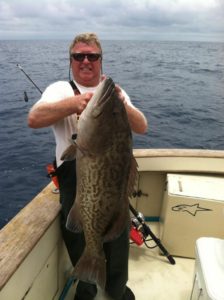 At the age of ten, Captain Jimmy knew he had a passion for being on the water. By the time he was 14, Jimmy’s dad bought him his first small boat—providing him with a way to explore the waterways of both the Halifax River and the Atlantic Ocean. After many trips to the inlet, Jimmy was offered a job as a mate on a local charter boat. By the age of 20, Captain Hull had obtained his captain’s license and began running his first charter and commercial fishing boats. Captain Hull would spend days out on the sea and then come unload his fresh catch at the docks of Ponce Inlet to sell to local fish markets.
In 1981 Captain Hull stumbled upon the opportunity to open his own retail seafood market, in the small town of Ormond Beach, just north of Daytona. As the business began to grow, Captain Hull expanded his retail space. In 2005, Captain Hull opened a small seafood kitchen, which was strictly for take-out orders only. While there was no fancy atmosphere or water view, the focus remained on serving the freshest seafood available. Due to its popularity, Captain Hull expanded the restaurant to include both indoor and outdoor seating.
In 2012, Captain Hull purchased an iconic charter boat, built right here in Ponce Inlet, the “Sea Lover”. Following the purchase, he added his own variation to the name, “Hull’s Sea Lover”, and with his fellow Captain Bill Billings, he continued in the charter industry while also using the vessel as a commercial vessel in the off season. Although Captain Hull doesn’t run the “Hull’s Sea Lover” anymore, as he’s busy running other vessels in his feet, you’ll often see him at the dock greeting you after your day of fishing. 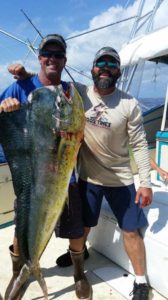 Captain Bill, a native of Volusia County, was born and raised to live his life in the woods and on the water. Prior to taking over the helm of the “Hull’s Sea Lover”, Captain Bill, worked under many of the great Captains on some of Ponce Inlet’s top charter, and commercial fishing, vessels. Due to his reputation of being able to get on the fish, once he received his captain’s license, Captain Bill became one of the top sought after captains of the charter fleet and spent many days putting his customers on the fish, just as he was known to do. He has since settled in at the helm of the “Sea Lover”, prior to being purchased by Captain Hull, and has been with the boat ever since. When he’s not fishing, you can likely find Captain Bill, spending time with his daughters either catching bait for the next day’s trip out in the woods hunting the next trophy Florida Deer. 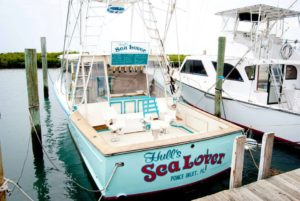 The “Hull’s Sea Lover” is a 39’6” foot Bob Sherbert Daytona Custom. With its beam at almost 14’ is makes for a comfortable ride off shore. Recently outfitted with a brand new 800hp, John Deere, diesel engine with a cruising speed right around 19kts, we’re able to get to the fishing grounds quickly and comfortably.